The Angu, called Kukukuku by their neighbors, are a small, but fierce people, previously known for their murderous surprise raids on other groups' villages.(1) They live in very remote mountainous country back of the Papuan Gulf. Until relatively recently much of their territory was a long walk from all except a few mission air strips. (map)

There are hundreds of small tribal groups in New Guinea. The Angu are well known because they had such a fearful reputation and a memorable nickname. They are known for their distinctive stone clubs.

Figure 1: Angu warriors carrying two of their star-shaped stone clubs at the 1997 Mt. Hagen Show. (from Axes and Clubs)

Archery contests are part of the various culture shows like the Mt. Hagen and Goroka Shows in Papua New Guinea. In the late 1970s, the Angu were awarded a cow as the grand prize. This cow was for breeding stock, but Angu territory was a week's walk away over rugged mountains and rushing rivers.

So they did the logical thing. They butchered the cow and ate it that night in the motor pool compound where they were camped. They were locked in the compound at night, because the other show participants were afraid of them. (from Bows and Arrows)

Figure 2: Angu necklace. The tassels are made of human hair braided over with bilum string and yellow orchid vine fiber. The center ornament is a possum ball. (from String and Things)

Thick, light colored clays are used all over New Guinea to indicate mourning and death. Deceased ancestors and bush spirits are part of most New Guinea peoples day-to-day, if unseen, world. The Leahys were first assumed to be returning ancestors by the Highland peoples because of their white skin.

Figure 4: This Angu woman, her body and face coated in yellow clay, is part of a performance group, but yellow and whitish clays are still commonly used by people mourning the death of a close relative. Heavy, multiple strands of coix seeds (Job's tears) are worn in some areas with the strands removed one at a time until the mourning period is finished. (from Skin as Ground...)

Diary entry, 1974: Trek from Kainantu to Marawaka with 130 Angu warriors. 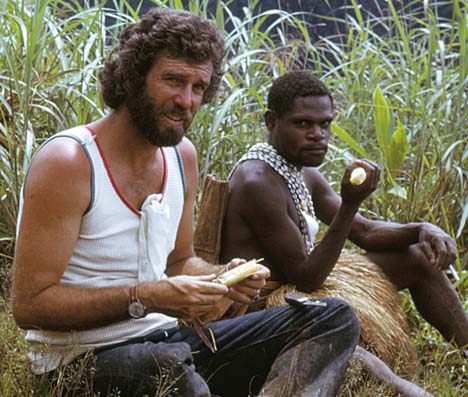 The government trucked everyone from Goroka to Kainantu in 2 or 3 big dump trucks. They walked on to Obura where the road ended. Marawaka was about 35 miles (50 km) further on bush tracks. That first day they walked to a village and slept overnight in grass huts. 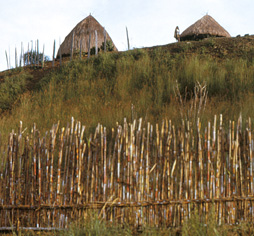 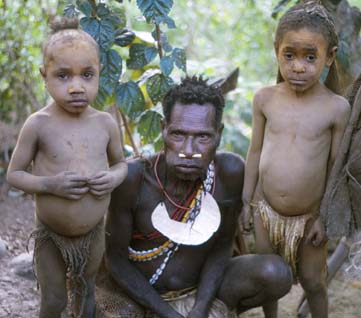 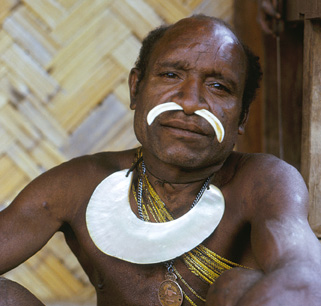